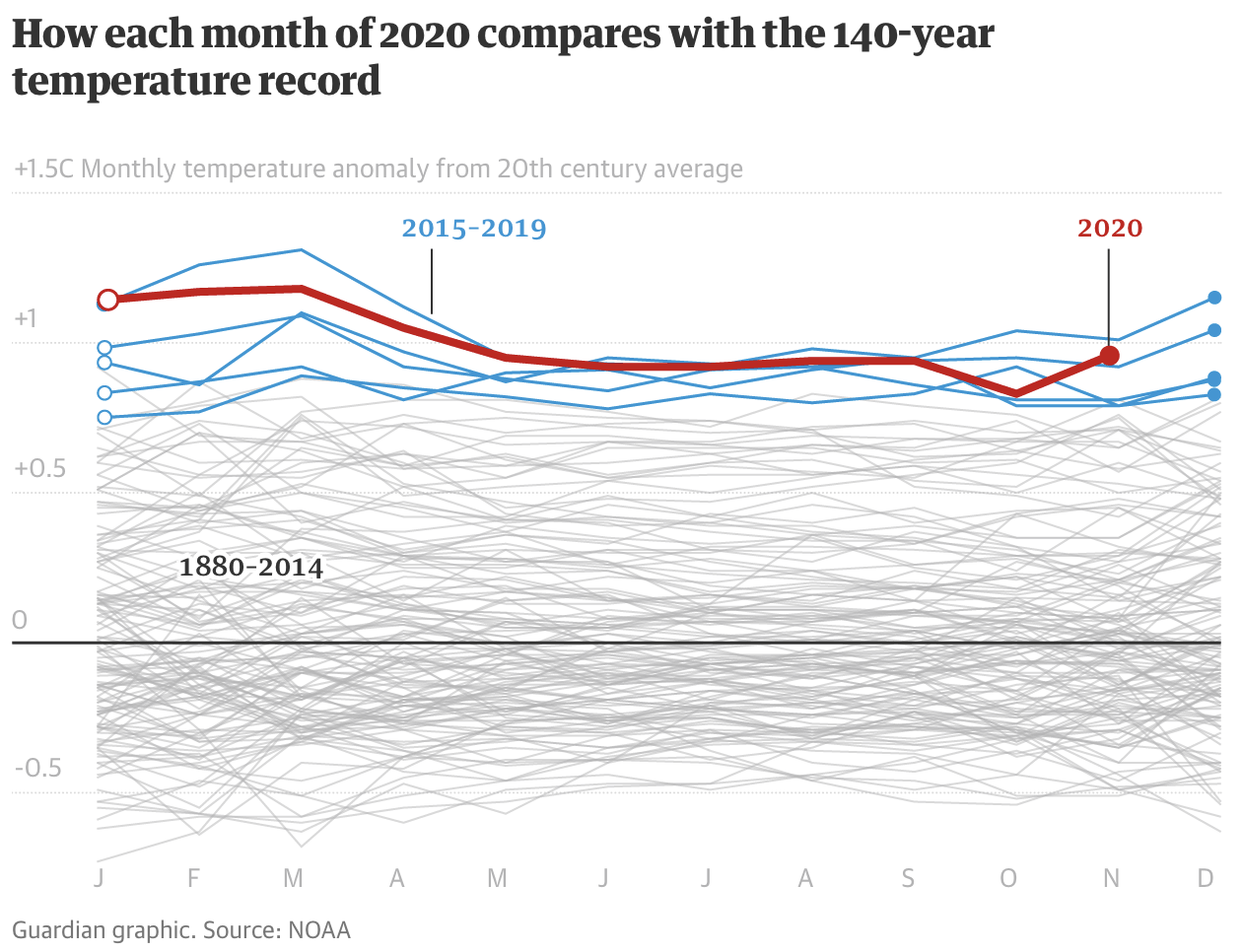 While Covid has dominated the news, the world has also felt the effects of human-driven global heating.

This article was first published by The Guardian.

This year has broken a series of unwelcome weather records. Last month was the warmest November in history. This followed the hottest January, May and September. All-time temperature peaks were registered from the Antarctic to the Arctic. Since the start of the year, Australia, Siberia and California have suffered record fires. The Atlantic has generated record storms. Ice in the Laptev Sea has started forming later than ever.

The coronavirus pandemic may have dominated the news and temporarily reduced emissions. But 2020 has also demonstrated the increasingly evident impact of human-driven global heating. The six hottest years in human history have all occurred since 2014. That sequence will certainly continue for a seventh year. The World Meteorological Organization (WMO) will soon know whether 2020 will take first, second or third place in the all-time ranking.

Scientists are surprised temperatures have been so high in the absence of an El Niño, the phenomenon that boosts warmer years such as the current record, 2016. On the contrary, the latter half of this year there was the emergence of a cooling La Niña, which churned up chillier-than-normal waters in the equatorial Pacific. Petteri Taalas, the secretary-general of the WMO, said that without this influence, 2020 would certainly have been the warmest year ever measured.

In climate terms, the long-term trend is more important than individual records, but it is the latter that directly affects lives and livelihoods. Unusual heat, drought, fires or storms can be caused by natural variation, local factors or industrial emissions, but scientists are increasingly able to identify that extreme weather events are more frequent and intense as greenhouse gases build up in the atmosphere.

“2020 has been another very hot year. We see very strongly the impact of what that means on the changing intensity and likelihood of extreme weather events,” said Friederike Otto, the associate director of the Environmental Change Institute at University of Oxford and co-lead of the World Weather Attribution initiative (WWA). “Every year of more emissions and increasing global mean temperature has an impact on people.”

Humankind’s fingerprint was particularly evident in the Siberian heatwave, which was made at least 600 times more probable by humans, and the Australian bushfires, which were made more than 30% more likely.

Here is how this year unfolded with global heating at 1.1C above pre-industrial levels. This toll may seem horrifying, but it is just a sample – and will be modest compared with a future world on course for more than 3C of warming.

1 January
Record floods in Indonesia kill at least 19 people, with 62,000 evacuated. The national meteorological agency reports the highest daily rainfall seen in Jakarta since records began in 1866: “This is not ordinary rain.”

4 January
Temperatures in the Sydney basin hit a new high of 48.9C, the latest in a series of records in Australia. Bushfires create a 620 miles (1,000km) wide, 21 miles high smoke cloud, three times bigger than anything seen in the world before. It spreads so far that black charcoal reaches Antarctica. Scientists describe it as “a new benchmark on the magnitude of stratospheric perturbations.”

6 February
Record mainland Antarctic heat. The Argentinian research base Esperanza on the northern tip of the Antarctic peninsula, measures a new high for the southern continent of 18.4C (65.3F).

9 February
Record Antarctic island heat. The 20.75C logged by Brazilian scientists at Seymour Island is almost a full degree higher than the previous record of 19.8C in 1982. This has still to be confirmed by the WMO.

31 March
The Australian bushfire season comes to an end after more than six months of destruction – 33 fatalities, 3,000 homes burned, and more than 10m hectares (25m acres) razed. Wildlife deaths are estimated at more than 1bn mammals, birds and reptiles combined, and hundreds of billions of insects. From the beginning of September 2019 to 23 February 2020, bushfires have emitted 434m tonnes of carbon dioxide, equivalent to about three-quarters of the discharges of Australian industry. Studies by the WWA indicate the bushfires were made at least 30% more probable by human-driven climate change. The summer of 2019-2020 is the second-hottest ever, after the previous year’s summer.

MAY
Joint-hottest May on record

11 May
Devastating floods in Kenya and Uganda after heavy rain lead to 200 deaths, and the displacement of at least 400,000 people.

20 May
Super-cyclone Amphan is the fiercest storm to hit the Bay of Bengal this century, with winds of 118mph (190kmh). Two million people are evacuated, 129 killed. It is the costliest tropical cyclone on record, with losses in India of $14bn (£10bn).

20 June
Record Arctic heat. The Russian town of Verkhoyansk registers 38C (more than 100F) amid a freakishly prolonged Siberian heatwave. Siberian wildfires cover almost 1m hectares and release 59m tonnes of carbon dioxide, surpassing last year’s record. On average, temperatures in this region of the Arctic have been 5C above average in the first six months of the year. Scientists from the WWA say this was made at least 600 times more probable by human emissions.

24 July
A third of Bangladesh is underwater after the most prolonged monsoon flooding this century, killing 550 and affecting 9.6 million people across the subcontinent.

13 August
Two months of record rainfall in southern China kills 219 people, prompts the evacuation of 4 million, and causes $26bn in economic losses. The Three Gorges Dam inflow hits a record 72,000 cubic meters a second. The megacity of Chongqing is put on its highest flooding alert since 1981.

16 August
Hottest summer ever in the northern hemisphere. Death Valley records a temperature of 54.4C (129.9F), the third-highest on Earth since 1931 (and the two previous records are in question).

26 August
Record fires in California. More than 405,000 hectares burn in nine days – more than three times the average in the “normal” wildfire season. At least five people are killed, and more than 100,000 evacuated.

28 August
Record rain in Karachi of 231mm (9 in) in a single day. Pakistan has the wettest month in its history.

4-12 September
Record flooding in the Sahel region of Africa affects 500,000 people. The White and Blue Nile burst banks. The average level of the Blue Nile reaches 17.43 metres (57.19ft), the highest since Sudan started measuring in 1912. Senegal records 124mm of rain over a seven-hour downpour – the amount that would usually be expected across the entire rainy season from July to September. Sudan imposes a three-month state of emergency on 4 September, after rains destroys about 100,000 houses and kills more than 100 people. In Nigeria, flooding damages 500,000 hectares of farm produce, amounting to about 5bn naira (£9.8m), according to NKC African Economics.

3 October
The UK has its wettest day on record after Storm Alex, with enough rain to fill Loch Ness.

4 October
Wildfires in California spread over 1.6m hectares, a new annual record for the most hectares burned in a single year.

31 October
The lowest Arctic sea ice extent for the month of October, after the latest ever start to ice formation in Laptev Sea.

2 November
Philippines hit by Typhoon Goni, one of the strongest storms in history with gusts of up to 192 mph. At least 20 people are killed and almost a million evacuated.

17 November
Iota, the strongest hurricane on record to strike Nicaragua, triggers catastrophic flooding and landslides. At least 40 people die across Central America and Colombia. It follows Hurricane Eta – the first time on record the Atlantic has had two major hurricanes in November.

22 November
Somalia is devastated by Cyclone Gati, the strongest storm to hit this part of world since records in this region began five years ago. Rainfall in two days equals the two-year average. At least eight dead.

1 December
Record-breaking Atlantic hurricane season ends. Thirty storms grew strong enough to earn a name, beating 2005’s record of 28 storms. The WMO ran out of storm names by September, turning to the Greek alphabet for labels for the first time since 2005.

4 December
The bushfire season starts early in Australia with devastating wildfires on Fraser Island as experts worry that the months ahead could be disastrous.

12 December
The World Meteorological Agency says 2020 is certain to be among the three hottest years ever recorded. Although global emissions are likely to have fallen by 7% this year, carbon concentrations in the atmosphere continue to rise. The UN reports global heating in on course to reach 3.2C by the end of the century because governments are not taking sufficient climate action to keep temperatures to the Paris Agreement target of 1.5C to 2C. All eyes are now on the UN climate conference (Cop26) in Glasgow next year.

30 December
Almost one year on from the first reported case of Covid-19 in Wuhan, China, the worldwide death toll of the pandemic has passed 1.6 million people and is estimated to cause $28tn of losses. Scientists have warned such outbreaks will become more common as the world’s natural life support systems, including the climate, break down as a result of rising temperatures, deforestation and the illegal wildlife trade. The UN secretary general says humanity has been waging war on nature, and that making peace will be the defining task of the 21st century.

Refer a colleague and enter to win Amazon Gift Cards!

Download WeatherBuild Mobile on the App Store and rate us 5 stars!